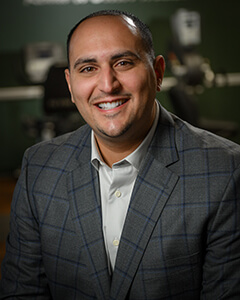 Michael Maffucci co-founded Pro Staff Physical Therapy in 2010. Originally the Director of Operations and a Board of Directors member, he is responsible for implementing the core structure of day-to-day management. He also played an instrumental role in determining company expansion and putting Pro Staff in the best position for growth.

In July of 2016, Michael became the CEO of Pro Staff Physical Therapy and was named Chairman of the Board. Michael now oversees the entire corporation including eight outpatient centers and a central office located in Nutley, New Jersey.

Michael grew up in Nutley, New Jersey where he attended Nutley High School and emerged as a varsity athlete in football, baseball, and wrestling. Michael attributes his strong work ethic and professional success to lessons learned from his early athletic experiences. He then went on to play Division 1 baseball at Florida Atlantic University. After transferring to Wagner College, he continued to play baseball and graduated in 2009 with a Bachelor of Science degree focused in business management. In 2011, Michael received an Administrators Certification after completing six modules from the Administrators Certificate Program given by the Private Practice Section (PPS) of the American Physical Therapy Association (APTA).

Michael married his high school sweetheart, Jenna Pavlisko in 2012. They have two beautiful children, Vienna and Michael, and live in Essex County . When not in the office, Michael is found participating in many community organizations, such as Nutley UNICO and the Nutley Chamber of Commerce. He also serves on the Kids Chance of NJ’s volunteer committee, which provides scholarships to individuals whose parent/guardian was involved in a catastrophic work related injury.