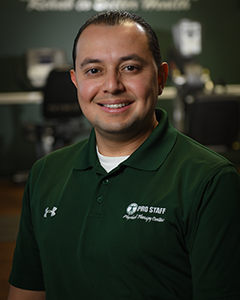 Dr. Carlos Ospina PT, DPT became a partner at Pro Staff Physical Therapy in 2014 after originally joining the company as the Director of Physical Therapy. He became Chief Clinical Officer in July 2016 and currently manages all clinicians and rehabilitation aides as well as maintains Pro Staff’s standard for exceptional care.

Dr. Carlos Ospina was born in Colombia and grew up in Morristown, NJ. He graduated from Morristown High School and earned his Bachelor’s of Science in Exercise Science and Sport Studies from Rutgers New Brunswick. In 2009, he received his Doctor of Physical Therapy degree from Rutgers/UMDNJ.

Since completing his education, Dr. Ospina has dedicated his career to practicing in both outpatient and acute settings. His background in acute care has given him comprehensive understanding of rehabilitation for individuals recovering from orthopedic surgery. His experience also includes treating post-surgical cases such as ACL repairs, knee/hip replacements, and spine and shoulder surgeries and balance/vestibular conditions.

Dr. Ospina believes that continuous education is critical to practicing effectively. He is often researching new evidence-based treatments and uses this knowledge to provide patients with highly customized care.

Dr. Ospina and his wife Marnei reside in Bridgewater, NJ with their children. In addition to working with Pro Staff, he is also a member of the American Physical Therapy Association and is actively involved in community programs for kids including Kids’ Chance of New Jersey.